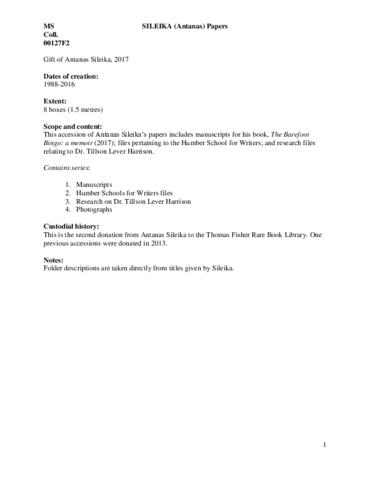 Antanas Sileika is a Canadian novelist and critic. He was born in Weston, Ontario to Lithuanian parents.

After completing an English degree at the University of Toronto, he lived in Paris for two years. There he met his wife, Snaige Sileika (née Valiunas) and studied French. He also taught English in Versailles and worked as part of the editorial collective of the expatriate literary journal, Paris Voices.

When he returned to Canada he began teaching at Humber College and working as the co-editor of the Canadian literary journal, Descant, until about 1988.

Sileika’s first novel, Dinner at the End of the World, was published in 1994. His second book, Buying on Time (1997), a collection of linked short stories, was nominated for both the City of Toronto Book Award and the Stephen Leacock Award for Humour. His third book, Woman in Bronze was published in 2004. His latest novel is untitled Underground and was published in 2011.

Currently, Sileika is the director for the Humber School for Writers in Toronto, Canada and also makes occasional appearances on Canadian television and radio as a freelance broadcaster.

This accession of Antanas Sileika’s papers includes manuscripts for his book, The Barefoot Bingo: a memoir (2017); files pertaining to the Humber School for Writers; and research files relating to Dr. Tillson Lever Harrison.

No restrictions on access. Material may be requested in person at the Fisher Library Reference Desk, or in advance using our online stack retrieval request form: https://fisher.library.utoronto.ca/stack-retrieval-request