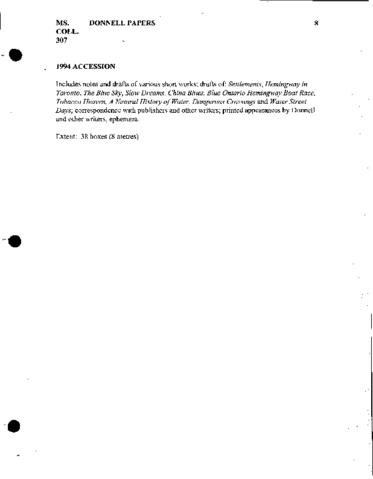 David Donnell is a Canadian poet and writer. He was born in 1939 in St. Mary’s, Ontario. He moved to Toronto in 1958 and became acquainted with other Toronto poets through the Bohemian Embassy. In 1961, he published his first book, Poems, and assisted John Robert Colombo in printing Margaret Atwood’s first book, Double Persephone. Other published works of Donnell include: The Blue Sky (1977), Dangerous Crossings (1980), Hemingway in Toronto (1982), Settlements (1983), which was the Governor General’s Award for Poetry, The Blue Ontario Hemingway Boat Race (1985), Water Street Days (1989), China Blues (1992), which won the City of Toronto Book Award, Dancing in the Dark (1996) and Sometimes a Great Notion (2004).

Material may be requested in person at the Fisher Library Reference Desk, or in advance using our online stack retrieval request form: https://fisher.library.utoronto.ca/stack-retrieval-request. Please note that this material requires 2 business days to retrieve.