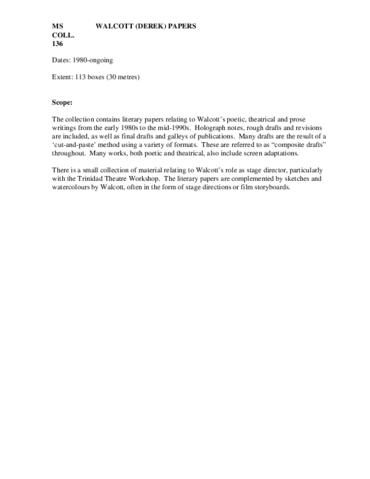 The collection contains literary papers relating to Walcott's poetic, theatrical and prose writings from the early 1980s to the mid-1990s. Holograph notes, rough drafts and revisions are included, as well as final drafts and galleys of publications. Many drafts are the result of a 'cut-and-paste' method using a variety of formats. These are referred to as "composite drafts" throughout. Many works, both poetic and theatrical, also include screen adaptations.

There is a small collection of material relating to Walcott's role as stage director, particularly with the Trinidad Theatre Workshop. The literary papers are complemented by sketches and watercolours by Walcott, often in the form of stage directions or film storyboards.