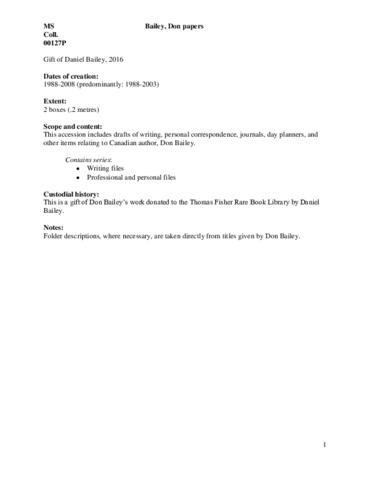 Novelist, poet, story writer, playwright, television and film writer born in Toronto in 1942 and spent the first years of his life in that city. He has lived in Vancouver, Peterborough County, Winnipeg and elsewhere in Canada. He became a writer while serving a prison sentence. Bailey has little formal education, having quit school when he was thirteen after completing grade 8. However he studied journalism through correspondence courses during his stay in prison and discovered that he had talent both as a writer and as a person interested in helping others.

After he was released from prison Bailey worked in corrections while trying to make his living as an author. He started an agency in Toronto called Springboard and has run halfway homes in Winnipeg and Peterborough, which attempted to keep families of inmates together.

Bailey's work has been published in numerous magazines: West Coast Review, Saturday Night, Tamarack Review, Canadian Forum, Quarry and the Toronto Star. His work has been read on CBC radio and he has written several television plays, among them Nightfall (CBC, 1980); Shared Accommodation (CBC, 1980), All Sales Final (played at the St. Lawrence Centre in Toronto).

Some of his published books are: