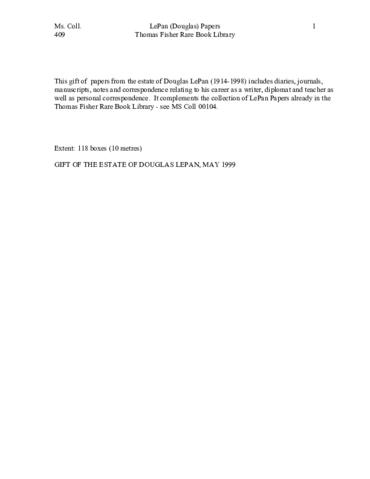 Douglas LePan was a Canadian poet, writer, diplomat and teacher. Born in Toronto in 1914, LePan received degrees from the University of Toronto and Merton College, Oxford. He taught English literature at the University of Toronto and Harvard between 1937 and 1941, at Queen’s University from 1959-1964 and again at the University of Toronto from 1964-1979. During the Second World War he served as an artillery man in the Italian campaign. He was in the Canadian diplomatic service from 1946 to 1959 and served as the secretary and director of research for the Royal Commission on Canada’s Economic Prospects. LePan’s time in the military inspired much of his poetry and fiction including The Net and the Sword (1953) and the Deserter (1964), both of which won a Governor General’s Award. Later poetry collections including Something Still to Find (1982) and Far Voyages (1990). In 1989, he penned a book of memoirs, Bright Glass of Memory. LePan died in 1998.

This gift of papers from the estate of Douglas LePan (1914-1998) includes diaries, journals, manuscripts, notes and correspondence relating to his career as a writer, diplomat and teacher as well as personal correspondence. It complements the collection of LePan Papers already in the Thomas Fisher Rare Book Library

Material may be requested in person at the Fisher Library Reference Desk, or in advance using our online stack retrieval request form: https://fisher.library.utoronto.ca/stack-retrieval-request. Please note that this material requires 2 business days to retrieve.