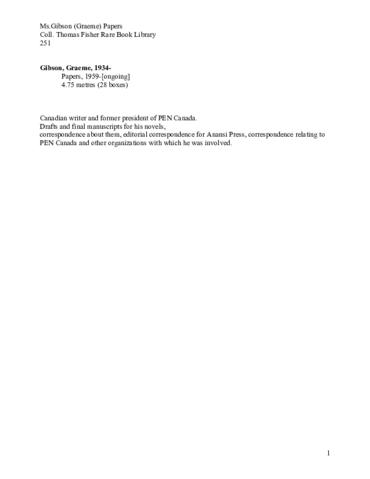 Graeme Gibson was born in London, Ont. in 1934. He studied at the University of Western Ontario and later taught at Ryerson. He has travelled widely, living abroad in England, France, and elsewhere. In 1959 he married Shirley Gibson, who later became President of Anansi Press (1972-1974). In 1969 his first novel, Five Legs, was published by Anansi Press, followed by his second, Communion, in 1971. In the 1970's he became active in various cultural organizations. He was a founding member of the Writer's Union of Canada, serving as its chairman in 1974/75. In 1975 he helped to establish the Book and Periodical Development Council, which he chaired the following year. He has also been chairman of the Writer's Development Trust. In 1973 he edited a collection of interviews entitled: Eleven Canadian Novelists, published by Anansi Press. In 1978 he was awarded a Scottish Canadian Exchange Fellowship. In 1982 he published his third novel, Perpetual Motion and in 1993, Gentleman Death. In 1996, he decided to stop writing novels and has since published two non-fiction books: The Bedside Book of Birds (2005) and the Bedside Book of Beasts (2009). He lives in Toronto with Margaret Atwood.