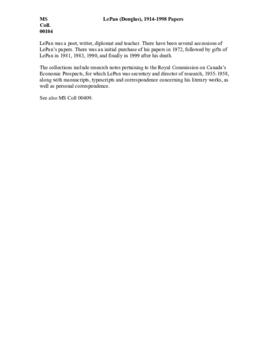 The collections include research notes pertaining to the Royal Commission on Canada's Economic Prospects, for which LePan was secretary and director of research, 1955-1958, along with manuscripts, typescripts and correspondence concerning his literary works, as well as personal correspondence.

Consists of material created or gathered by F.G. Shears in his capacity as the director of the Vancouver branch of the office of the Custodian of Enemy Property. The Vancouver office was established in 1942 following the attack on Pearl Harbor, with the special purpose of overseeing the seizure and, later, liquidation of assets of Japanese removed from the Pacific exclusion zone for internment. The office also helped with the administering of Japanese claims for remuneration in accordance with the findings of the Royal Commission, and Justice Henry Irving Bird, in 1950. The office was closed on March 31, 1952.