This fonds contains 72 accessions of records from Hart House, including the records of various clubs and groups. See accession-level descriptions for details.

Consists of correspondence, diaries, addresses, notes, minutes, reports, manuscripts, photoprints, a watercolour, a sketch and an architectural drawing documenting Dr. Land's career as a professor of and administrator in library science at the University of Toronto and as provincial librarian of Ontario.

Personal records of Frederic Urban, artist and lecturer in architecture, documenting his education, teaching and professional activities, particularly from his entering the Nova Scotia School of Art and Design in 1975 through his teaching at the University of Waterloo and the Faculty of Architecture, Landscape and Design at the University of Toronto. Includes correspondence, notes, teaching materials, files on research in Italy and on exhibitions and performance. Also includes files on visiting lectureships, especially at the Nanjing Institute of Technology/South East University in Nanjing, China (1987-1988), architectural drawings, photographs, slides, posters, publications, film and video.

Architectural drawings covering W.E. Young's years as a student in the Faculty of Applied Science. Included is one submitted in his unsuccessful bid for the Darling and Pearson Prize in 1934.

Personal records documenting the careers of Alexander Peter Cockburn and his children, Jean Elizabeth Munro, Harriet Macmillan Cockburn, James Roy Cockburn, Cecilia Catherine Cockburn, and Mary Barnfield. The records include diaries, certificates, legal documents, course notes and term papers, lecture notes, notes, medical case books, addresses, publications, blueprints, design drawings, photographs, lantern slides, sketches, trench and other military maps (First World War), press clippings and medals. The most extensive series record the activities of Alexander Peter Cockburn as president of the Muskoka and Nipissing Navigation Company; Harriet Cockburn as a medical doctor, especially relating to her service in Serbia during the First World War; Jean Munro's career as an artist in France; and Roy Cockburn's career as professor of engineering drawing in the Faculty of Applied Science and Engineering, and his military service in the First World War with the Royal Engineers in France and with the Egyptian Expeditionary Force under General Allenby in Palestine.

Documents belonging to Merwin Malcolm who was the project manager for Stone Webster, the company hired to construct Robarts Library. Records relate to the design and building of Robarts Library and include progress photos, design photos and drawings, correspondence, reports and plans.

University of Toronto. Office of the Vice-President (Research and Planning)

Part of University of Toronto. Office of the Vice-President and Provost fonds

University of Toronto. Office of the Vice-President (Research and Planning)

Part of University of Toronto. Office of the Vice-President and Provost fonds

Correspondence, biographical file, lecture notes, research files, etc of Martin A. Peacock, professor of Crystallography and mineralogy at the University of Toronto from 1937-1950.

Plan of a Subdivision of part of The University Grounds

This sub-series consists of one plan of survey as bounded by Hoskin Avenue to the south, Bloor Street to the north, and St. George to the west. Devonshire Place runs centre to those properties outlined. Annotations highlight properties currently held by the Monk Centre for International Studies, previously Devonshire House, university residences.

This series consists of architectural records that have been created for separate bodies but that relate to the built history of properties held or used by the University of Trinity College. Although not created directly for Trinity College, these materials (architectural plans, maps, and surveys), have a bearing on the present physical location or with locations associated with it; these plans may not be directly related to Trinity College use and may include materials not commissioned by the College.

This sub-series consists of 7 items: 5 ink on linen drawings for an apartment building at the south-west corner of Harbord and St George Streets, Toronto; 2 blueprint architectural drawings outline changes proposed in 1924 to renovate the building to better serve as a student residence. These changes included the expansion of common areas, and the creation of a chapel on the main floor. These subsequent renovations were envisioned by Darling and Pearson, Architects. 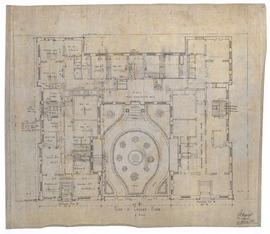 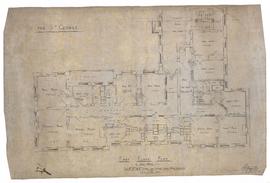 [Annotation: "the 2nd, 3rd and 4th floors are similar except wall thickness, which is 42" less"] 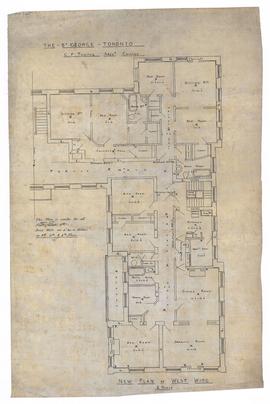 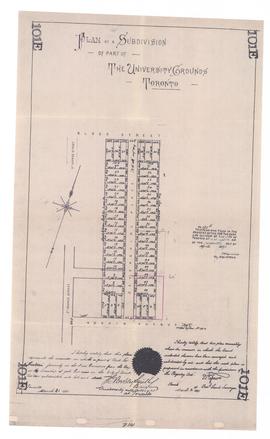 Plan of a Subdivision of part of The University Ground (101E) 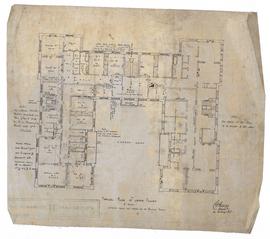 Typical plan of the upper floors

[Annotation: "interior walls are shewn as on 3 upper floors"] 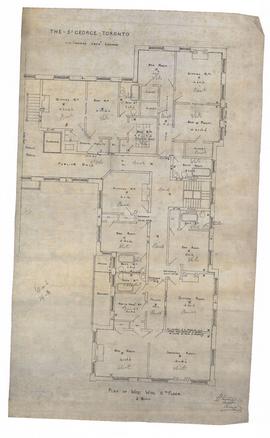 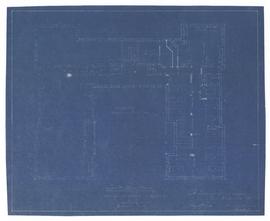 This sub-series consists of 48 drawings drawn from several renovation or construction projects. These drawings, generally simple floorplans, were used to generate a space inventory used by the University in scheduling class space, and student residence accommodations. 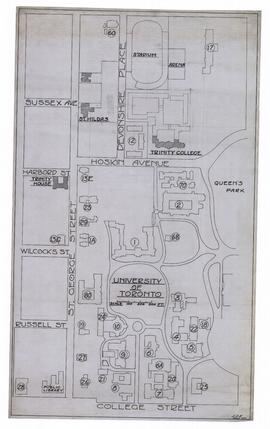