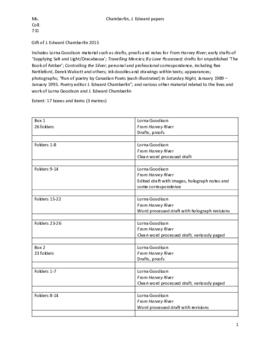 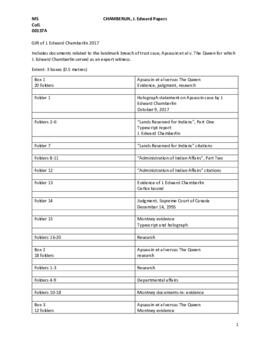 Includes documents related to the landmark breach of trust case, Apsassin et al v. The Queen for which J. Edward Chamberlin served as an expert witness. 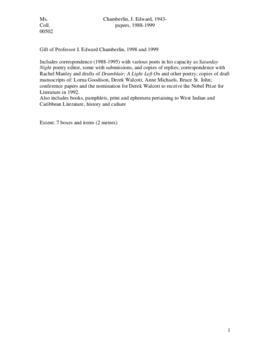 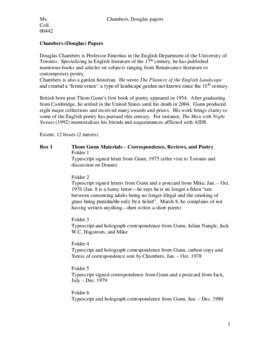 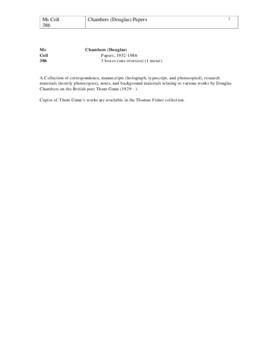 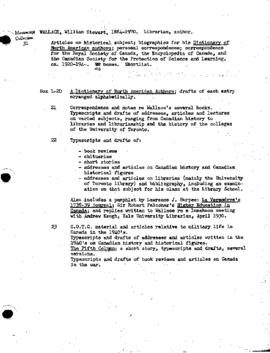 Contains articles on historical subjects; biographies for his Dictionary of North American authors; personal correspondence; correspondence for the Royal Society of Canada, the Encyclopedia of Canada, and the Canadian Society for the Protection of Science and Learning, ca. 1920-1940-. 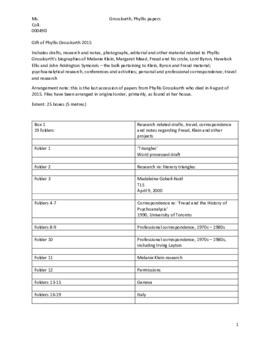 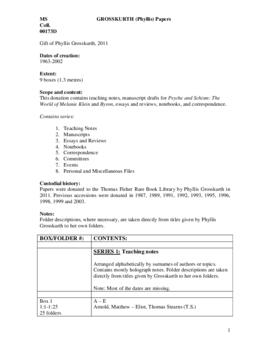 This donation contains teaching notes, manuscript drafts for Psyche and Schism: The World of Melanie Klein and Byron, essays and reviews, notebooks, and correspondence. 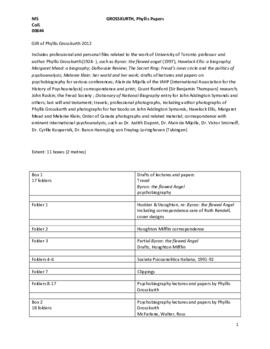 92-word abstract of the second volume of Sound and Symbol [Man the Musician] and publisher details.

The memorandum informs recipients that Bollingen Series will be adjusting their royalty payment and statement cycles to match those of Princeton University Press.

Index of Zuckerkandl's printed essays, with titles, date and publication information, number of examples. From 1944 to 1965.

Biographical note on Viktor Zuckerkandl and his works. Top of first page reads “for last page(s) of book” [possibly Sound and Symbol II: Man the Musician].

Memorandum of agreement between Hermine Müller-Hofmann [born Zuckerkandl] and Princeton University Press for the second volume of Sound and Symbol [Man the Musician].

Index of Zuckerkandl's typed manuscripts, with titles and numbers of pages. Includes essays and lectures. Dates indicated range from 1930 to 1950, though many have no date indicated.

This collection contains an indexing of selected unpublished materials related to the music theorist and philosopher Viktor Zuckerkandl (1896–1965). Included are descriptions of digitized correspondence, manuscripts, and miscellanea. The three archives that hold the physical media are cross referenced (ONB, Eranos, St. John’s).

Folder contains descriptions of correspondence involving or about Viktor Zuckerkandl.

Replying to Ritsema’s letter of 1971-10-13, Thomas explains that Arthur Mendel [Professor in the Music Department at Princeton] brought typographical and textural errors to the attention of the Press and suggested other improvements. They decided to reprint an edition with the corrections and modifications, the work for which had to be charged against the royalties. Thomas lists the changes in the new edition and says he is sending Ritsema and Hermine Müller-Hofmann [Zuckerkandl’s sister] copies for them to see themselves.

Bangs forwards Ritsema a letter from Albert Müller Verlag expressing interest in publishing a German edition of the second volume of Sound and Symbol [Man the Musician]. Bangs asks that Ritsema review the offer and to let Princeton University Press know whether they can proceed with negotiations. Postscript in Dutch asks about Ritsema’s Dutch heritage.

Orr makes reference to the conversation over a German edition of the second volume of Sound and Symbol [Man the Musician] between Princeton University Press and Albert Müller Verlag [see letter of 1976-03-05]. Orr points out to Ritsema that the contracts they hold with Princeton University Press for both English volumes of Sound and Symbol [Music and the External World, Man the Musician] make no mention of ownership of rights for the original German editions, which now belong to Hermine [incorrectly spelled as Hermione] Müller-Hofmann [Zuckerkandl’s sister and sole heir]. Therefore, Ritsema and Müller-Hofmann are free to negotiate the contract over future German editions without Princeton University Press, unless the musical examples from the Bollingen edition are used. In addition, any new German editions must take into account the work provided by the translators and editors of the U.S. edition. Orr asks Ritsema to sign and return the letter if he agrees to the terms.

Letter from Hermine Mueller-Hofmann to Gunter Brosche, director of the music collection at the Austrian National Library, donating photocopies of the unpublished drafts of Zuckerkandl's Man the Musician to the library.

Tegarden informs Ritsema of all sales of the second volume of Sound and Symbol [Man the Musician] since its publishing in 1973. Due to diminishing sales in recent years, Princeton University Press is declaring the book out of print, but they will be leasing reprinting rights to University Microfilms. Tegarden will be sending two complimentary copies for the Eranos archive. The first volume [Music and the External World] remains in print.

Letter from Rudolf Ritsema, director of Eranos Foundation, to Helmut W. Lang, general director of Austrian National Library. Donating photocopy of original German manuscript of Man the Musician [likely Part I only], with annotations by the author, and detailing discoloration/damage to musical examples.

Reply from Lang to Ritsema, thanking him for the donation of the German manuscript of Man the Musician [likely Part I only] to the Austrian National Library. Handwritten annotation by Gunter Brotsche, director of the music collection at the Austrian National Library, indicates that this copy replaces an older copy of the document [likely donated by Hermine Mueller-Hofmann in 1985].

[Letter from Zuckerkandl to unspecified recipient at Book of the Month Club, n.d.]

Zuckerkandl writes to an unspecified person likely connected to the Book of the Month Club. He proposes releasing a series of music education LPs.

McGuire begins with the news that [Paul] Mellon, founder of the Bollingen Foundation, is not dead but that rather it is his sister Ailsa [Mellon Bruce] who passed away [August 25 1969]. The Bollingen Foundation has been succeeded by the Andrew W. Foundation, where McGuire says Mr. Barrett can still be contacted. McGuire mentions that the Eranos 1971 program looks interesting and asks Ritsema for his opinion on using an Erich von Kahler Merkur article [“Was ist Musik? Zum Lebenswerk Viktor Zuckerkandl” October 1965] as a preface to the second volume of Sound and Symbol [Man the Musician, see letter of 1971-03-25] and on including photograph of Zuckerkandl’s bust in the book [see letter of 1971-01-25].

McGuire informs that the typescript of the second volume of Sound and Symbol [Man the Musician] has gone into production. He has decided that they will not use Erich von Kahler’s article from Merkur [“Was ist Musik? Zum Lebenswerk Viktor Zuckerkandl” October 1965, see letters of 1971-03-25, 1971-04-05] as a preface to the book. He shares that Kahler died the previous summer [June 28 1970] and they cannot finance a translation of his article. McGuire then gives Ritsema instructions on how to properly acknowledge the contributors to translations of three of Plato’s Dialogues facilitated by Princeton University Press, which Ritsema intends to quote on the program [unspecified, likely for the 1971 conference].

Ritsema writes to clarify royalty earnings and their taxation as they affect Hermine Müller-Hofmann, Zuckerkandl’s sister and sole heir. At the advice of the Swiss tax-authority, Ritsema asks that royalties be taxed at the source to avoid double-taxation between the U.S. and Switzerland.

Humphrey announces that the official publication date for the second volume of Sound and Symbol [Man the Musician] will be October 30 [1973]. Humphrey proceeds to outline the entire promotional and sales strategy to reach as many institutions and readers as possible across the globe.

The sender advises Ritsema that he should pursue the publication of both volumes of Sound and Symbol [Music and the External World, Man the Musician] in German by contacting prospective publishers. He offers to send copies of the U.S. edition to show publishers and suggests some possible publishers. He also suggests contacting Wolfgang Sauerland for help and ideas and hiring an agent that is more familiar with German publishers and can help advertise the books [second page missing].

Ritsema acknowledges receipt of the contract sent by Orr [see letter of 1976-05-25] and sends it back signed with the approval of Hermine Müller-Hofmann [Zuckerkandl’s sister]. Ritsema informs Orr that Albert Müller Verlag has opted not to publish a German edition of the second volume of Sound and Symbol [Man the Musician], but that he is in conversation with Heinrichhofen’s Verlag. Answering a question from Orr, Ritsema relates that Rhein-Verlag previously published a German edition of the first volume [Music and the External World] under the title Wirklichkeit der Musik, but the edition was not successful.

Orr acknowledges receipt of the signed memorandum of agreement from Ritsema over the publication of the second volume of Sound and Symbol [Man the Musician, see letters of 1970-12-09, 1971-01-16].

Ritsema acknowledges receipt of the royalty statement for The Sense of Music from August 1 1970 to July 31 1971 and asks clarification regarding a charge for a corrected edition. Handwritten in French: “écrire Orr [from Princeton University Press]? parqui si peu vendu?”

Ritsema acknowledges receipt of two copies of the second volume of Sound and Symbol [Man the Musician] for the Eranos archive [since Princeton University Press had just declared the book out of print, see letter of 1993-03-18].

Bailey informs the recipient that Princeton University Press will be holding an overstock sale in which The Sense of Music will be included. Since items will be sold at a loss, no royalties will be paid on any sales.

Bailey describes reader's reports for "Law and freedom in the tonal world," including a report by Roger Sessions as well as an anonymous favorable report. He also describes a third report that was “not specific enough to be helpful in most cases.”

McGuire shares that production on the second volume of Sound and Symbol [Man the Musician] is moving along and sends Ritsema a publisher’s note and a biographical note [not included in the letter] to look over. He also mentions an article by Erich von Kahler in Merkur [“Was ist Musik? Zum Lebenswerk Viktor Zuckerkandl” October 1965] that he thinks will serve well as a preface for the book and asks Ritsema for his opinion.

Bangs replies to Jacober’s interest in publishing a German edition of the second volume of Sound and Symbol [Man the Musician] and informs her that Rudolf Ritsema has been advised to get in touch with her in order to discuss the matter. Princeton University Press is sending a copy of their edition of Man the Musician to Jacober.

Sender writes about the “cold and miserable” weather they are experiencing. They confirm a future visit in June [possibly at Eranos] and mention a future trip to Zagreb [purpose unspecified]. Sender agrees to a payment of 25000 Swedish Krona and shares two contacts’ addresses in Sweden [Viherl (?) and “Rudi”]. Sender is excited about the upcoming Eranos conference and six new speakers.

Zuckerkandl recalls he may have lent his Beethoven manuscript [from his 1964 lecture] to Frau Kerényi [?] and asks Ritsema to call her and ask.