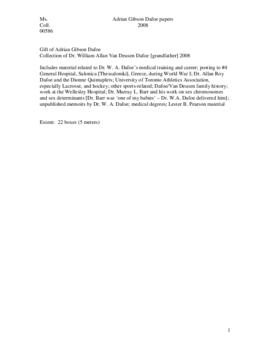 Includes 28 tapes of Purdy reading his poetry (Cariboo horses; Pressed on sand). Typescripts and drafts of poems. Typescripts and mimeographs of articles and plays for television and radio).

Collection includes correspondence, photographs and manuscript material related to the life and work of poet Albert Collignon, including his Martha's Clinic Letters series.

The papers contain his diaries with field notes, scrapbooks, photographs, correspondence, drafts of articles, notes, minutes of meetings for organizations of which he was an officer, and printed materials including newspaper clippings of columns written by other naturalists but collected by Allin. Included in the correspondence are letters from J. L. Baillie whose papers are also in the Thomas Fisher Rare Book Library.

Collection consists of the research files for Pathy's book Waterfront Blues: Labour Strife at the Port of Montreal, 1960-1978, published by the University of Toronto Press (2004).

The DeLury collection contains correspondence with Anglo-Irish writers, with friends and with book dealers. It also contains card files and notebooks relating to his collection of Ango-Irish literature and a few diaries from the 1920s.

The collection consists of Young's holograph notes on algebra of invariants and the theory of groups. It also includes a small amount of correspondence, mainly on the subject of mathematics.

The collection consists of drafts and typescripts of Wilkinson's writings, including The Hangman Ties the Holly (1955), Lions in the Way (1956), and Swann and Daphne (1960). Literary correspondence is also included.

A collection of typescripts of two unpublished books: Beyond the Arctic Circle and Arctic Dawn, as well as related correspondence.