The collection consists of typescripts, correspondence, notes and clippings relating to Innis' unpublished novel The Milburn Stone, and an edition of Anna Jameson's Winter Studies and Summer Rambles in Canada. It also contains typescripts and page proofs of Mrs. Simcoe's Diary (1965), edited by Innis.

Collection consists of typescripts, with editorial revisions and instructions to the printer in the manuscript, for Paton's book Factors in the Ruin of Antiquity: A Criticism of Ancient Civilization.

The collection consists of correspondence, articles and research notes on criminology, penal reform, sentencing and about the University of Toronto School of Social Work. 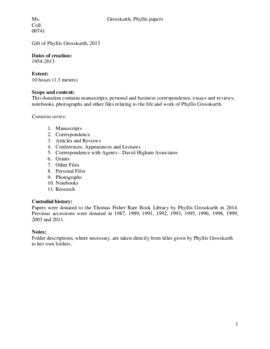