Correspondence, notices of lectures, letters of reference, memorabilia, committee files and photographs document the career of Professor Sherwin Desser, a parasitologist in the Department of Zoology and Chairman of that department from 1990-1999. Desser also served as Chair of the Hart House Art Committee and there is one file documenting this role. Finally, there is also two painted portraits by Prof. Desser, one self-portrait and one of Kenneth C. Fisher.

World War II memoribilia preserved from a WWII scrapbook that most likely belonged to Duncan Graham of the Faculty of Medicine and that documented mainly the 15th Canadian General Hospital. Included are a few Christmas cards, photographs, typed memos, postage labels and the May 1941 Ontario Medical Association Bulletin.
This accession includes a group portrait of the 15th Canandian General Hospital taken in Toronto in Janauary 1940 with identification of many in the portait. There is also two small photos of officers and the ambulance corp at Niagara Camp, 1940.

Included in this small fonds is biographical data, citations, passports, clippings and other memorabilia. Also included are two notebooks compiled by Alice Lindsay. These are interleaved with correspondence and notes on the Chinese way of life. One note book is mainly Chinese sayings.
This accession also includes a two part photo album/scrapbook of the Lindsay’s trip through South East Asia and Europe to Canada in 1927. There are also photographs documenting their family, friends and colleagues.
Finally this accession includes an embroidered and weaved Chinese wall hanging as well as two sets of dinner place card holders showing Chinese life scenes. One set is made of Chinese paper cut work and a second set are pop up cards.

Records in this fonds consist mainly of film and video documenting many of the projects developed within the DPG by Prof. Ron Baecker as well as with colleagues and graduate students. Included are film reels collected and exhibited for the 20th anniversary and incorporated into the video Dynamic Image. These document very early projects such as Baecker’s Genesys: Computer Animation System (MIT, 1969), Leslie Mezei’s Art of Computers (1971), George Olshevski‘s Regular 4D Polytopes (ca. 1971). A poster from this event is also included. Videos demonstrate many of the technologically advance graphic works done by the DPG lab under Baecker’s directorship including, to list a few, CaveCat, Telepresence Ontario, MAD (Movie Authoring Design) and Apple Design Competition 1993 (Globall).

There is also one box of textual records documenting to limited degree other areas of Baecker’s career including TAGlab, Knowledge Media Design Institute and NECTAR – network for Effective Collaboration Technologies through Advanced Research. There is also a series of portraits done of Baecker in 1987 as well as an album documenting the work of the Telepresence Ontario Project.

Three diplomas belonging to Annie Sadie McKenzie who was an early woman graduate of the Faculty of Dentistry. Included are: 1922 Dominion Dental Council; 1922 Doctors in Chirurgia dentali; 1922 licentiate of dental surgery

An essay exploring the facets of music that make possible musical experience, including tone, movement, time, and space. Zuckerkandl writes that the experience of tone is always interpreted in relation to a tonal field, and that the difference between an acoustic event and a musical event is the dynamism of the latter. On movement, he writes that the idea of sound movement is problematic as sounds are not physical things that can move; the solution is to regard the movement of tones as pure movement that is separated from physical space. Time, on the other hand, is always pervaded by tactical experience through the experience of grouping; Zuckerkandl writes that we do not feel rhythm as equal division, but as a series of departures from and returns to an origin point, thus musical rhythm is felt as a wave, which can be felt at multiple levels. Musical time is thus felt qualitatively, not as absolute measurement. Finally, Zuckerkandl addresses musical space as a dynamic ordering of tones in relation to each other, rather than as a geometric concept, into which a person gains insight by placing themselves within the musical space as a participant. Zuckerkandl references prominent figures of Gestalt psychology throughout the article, including Max Wertheimer, Kurt Koffka, and Geza Revesz, as well as other figures from psychology and philosophy. Minor edits in pencil to phrasing.

The folders were separated into the following categories: 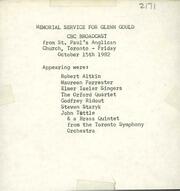 Manuscript regarding Marshall McLuhan and transgression

File consists of three pages of annotated typescript regarding the impact of Marshall McLuhan and his use of transgression in his work. This piece may have been the script for a lecture which Watson was asked to give following the death of McLuhan in 1980.

Manuscript of The Padded Pew

File consists of an original file folder containing a 17 page typescript of the short story "The Padded Pew", later published as "The Rumble Seat". There are notes and annotations on the file folder.

Manuscripts of The Double Hook

Manuscript draft of The Double Hook from Toronto

File consists of a 50 page notebook from Moulton College with 7 loose inserts totaling 60 pages of handwritten manuscript for "The Double Hook", including biblical quotes and reading notes.

File consists of a 143 page typescript of "Deep Hollow Creek", which, based on the cover sheet, Watson appears to have revised while teaching in Powell River, British Columbia.

File consists of a notebook containing 27 pages of reading notes on such subjects as Marshall McLuhan, avant-garde theatre, modern poetry and literary criticism; bibliographic citations; contact information for colleagues, scholars and students; and one short diary entry for January 10, 1982.

File consists of a 143 page typescript of "Deep Hollow Creek", the earliest surviving draft of the novel, which Watson submitted to McClelland & Stewart Publishing while she was living in Toronto.

File consists of a notebook containing 146 pages of reading notes on such subjects as W.B. Yeats, T.S. Eliot, Wyndham Lewis, art history and book reviews from the Times Literary Supplement; bibliographic citations; contact information for colleagues, scholars and students at the University of Alberta; ephemera, and two short diary entries for January 2, 1973 and February 2, 1974.

Diary from Edmonton, Calgary and Paris

File consists of a notebook containing 64 pages of handwritten diary entries by Watson while in Canada and France, reflecting on her situation and her relationships, and reading notes in ink and pencil, three pages of drawings and several pieces of ephemera, including a draft poem "Only those who have known birds" and an reflection on "The Double Hook".

File consists of a notebook containing 172 pages of diary by Watson while in London, England, Paris, Vancouver and Toronto, including ephemera, reading notes and reflections on her emotional state, her surroundings and her attendance at plays and art exhibitions in Paris and London. Upon her return to Canada in August, 1956, Watson's entries become more sporadic and begin to focus on reading and research notes related to her PhD studies at the University of Toronto, her experiences in the city, and her correspondence and short visits with her husband Wilfred, who at this time is teaching in Edmonton. It appears Watson has excised a passage from a diary entry of July 30, 1956.

File consists of a notebook containing 46 pages of dated reading notes on subjects including philosophy, literary criticism, and poetry; two pieces of ephemera, and one diary entry about chickadees.

File consists of a spiral notebook containing 81 pages of line drawings of people and other street scenes observed by Watson while living in Paris, as well as contact information for friends and notes on various schools in Europe and Africa and her employment opportunities. Also includes four loose self-portraits by Watson in pencil.

File contains annotated newspaper clippings and a photocopy in French and English concerning Communism and religion.

File contains a copy of a letter to the editor of The Sun Times, notes on a book store visit and several annotated newspaper clippings concerning freedom of the press.

File contains newspaper clippings, duplicate copies of an article by Stanley B. Ryerson and some handwritten notes on Canadian history.

File contains an editorial clipping and a brief typed report concerning the novel One Man Alone by Herman Buller.