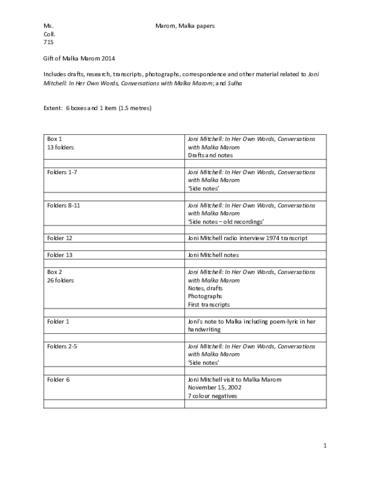 Malka Marom, born and raised in Israel, moved to Canada in 1954. In 1961 she met the singer, Joso Spralja, born in the former Yugoslavia and formed the duo "Malka and Joso" introducing world music to Canada, performing at coffee houses, halls and supper clubs in Toronto, Western Canada, England and the Yukon. In 1966 they sang at Carnegie Hall in New York and were hosts for the CBC television series, "A Wonderful World of Music". After 1967 they had solo careers. Marom eventually wrote and produced documentaries for CBC radio including the prize-winning "The Bedouins" and "A Bite of the Big Apple". The latter received an ACTRA award in 1977; the former, the Ohio State award in 1975. Her first novel, Sulha, was published in 1999. It has been translated into German and Greek.

Includes drafts, research, transcripts, photographs, correspondence and other material related to Joni Mitchell: In Her Own Words, Conversations with Malka Marom; and Sulha