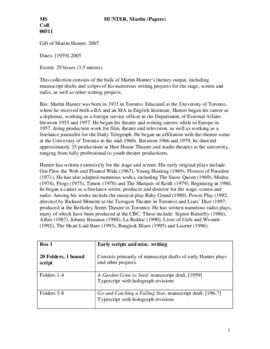 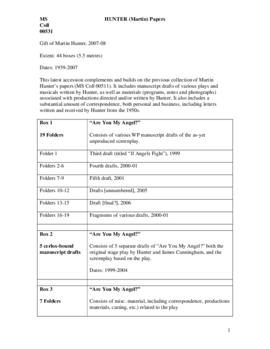 Martin Hunter was born in 1933 in Toronto. Educated at the University of Toronto, he began his career as a diplomat, working as a foreign service officer in the Department of External Affairs between 1955 and 1957. He began his theatre and writing careers while in Europe in 1957, doing production work for film, theatre and television, as well as working as a freelance journalist for the Daily Telegraph. He began an affiliation with the theatre scene at the University of Toronto in the mid-1960s. Between 1966 and 1979, he directed approximately 35 productions at Hart House Theatre and studio theatres at the university, ranging from fully professional to youth theatre productions. Hunter has written extensively for the stage and screen. His early original plays include: Out Flew the Web and Floated Wide (1967), Young Hunting (1969), Flowers of Paradise (1971). He has also adapted numerous works, including The Snow Queen (1969), Medea (1974), Frogs (1975), Timon (1978) and The Marquis of Keith (1979). Beginning in 1980, he began a career as a freelance writer, producer and director for the stage, screen and radio. Among his works include the musical play Baby Grand (1980), Power Play (1992, directed by Richard Monette at the Tarragon Theatre in Toronto) and Liars' Dice (1997; produced at the Berkeley Street Theatre in Toronto). He has written numerous radio plays, many of which have been produced at the CBC. These include: Signor Butterfly (1986), Allies (1987), Johnny Bananas (1988), La Bolduc (1990), Lives of Girls and Women (1992), The Heart Laid Bare (1993), Bangkok Blues (1995) and Laurier (1996).