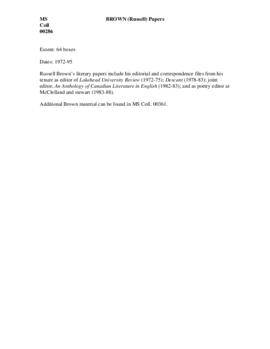 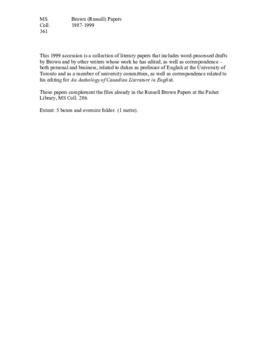 Russell Brown is professor emeritus of English at the University of Toronto, where he teaches Canadian literature. He formerly served as editor of the Lakehead University review (1972-1975), co-editor of Descant (1979-1983) and Editorial Director at McClelland and Stewart (1983-1988). He is the editor or co-editor of The Collected Poems of Al Purdy (1985); The Collected Poems of Patrick Lane (2011); An Anthology of Canadian Literature in English (2010); and The Penguin Book of English-Canadian Short Fiction (2005).

A collection of Russell Brown's literary papers, and his editorial and correspondence files from his tenure as editor at 'Lakehead University Review' (1972-1975), 'Descant' (1979-1983), as joint editor of 'An Anthology of Canadian Literature in English' (1982-1983), and poetry editor at McClelland and Stewart (1983-1988). Brown edited about thirty books of poetry, including works by Roo Borson, Lorna Crozier, Mary di Michele, Ralph Gustafson, Irving Layton, Douglas LePan, Susan Musgrave and Al Purdy. Some manuscripts are included with the correspondence. Manuscripts for which the authors sought Brown's editorial and critical suggestions may contain lengthy comments which, in many cases, resulted in the works being revised and later published.