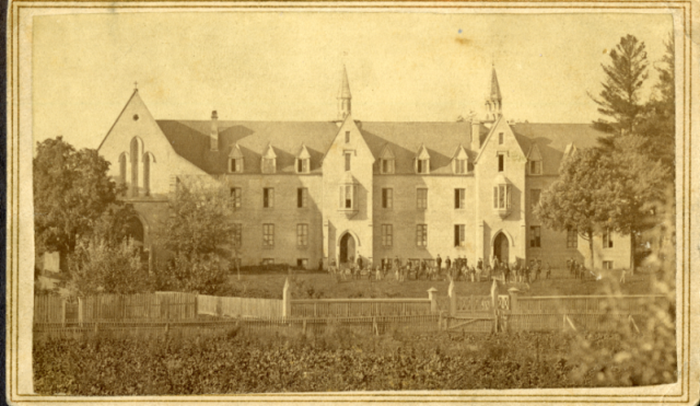 St. Michael’s College was founded in 1852 after the bishop of Toronto, Bishop Armand de Charbonnel, received permission from the Superior General of the Congregation of St. Basil to establish a Basilian educational institution in Toronto. Reverend J.M. Soulerin arrived in Toronto later in 1852 to establish the school with fellow Basilian priests. The College began teaching at three levels: high school, collège classique, and a minor seminary. Following a donation of land by John Elmsley from his Clover Hill estate in 1853, the College began classes in the newly constructed buildings in 1856.

The University of St. Michael’s College Act was enacted in 1958, and granted the institution university status, changing to a federated university within the University of Toronto. The Mission of USMC is to be Canada’s leading English-speaking Catholic University.

Appointments are required to view materials from the Archives. Please email usmc.archives@utoronto.ca or phone (416) 926 2348 for an appointment.

Researchers will be required to complete a Researcher Registration form upon arrival for their research appointment.

Researchers may request scans to be made of materials, with a fee. Information on the reproduction services fees can be requested.