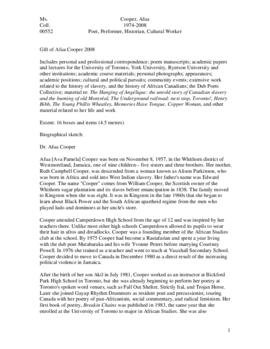 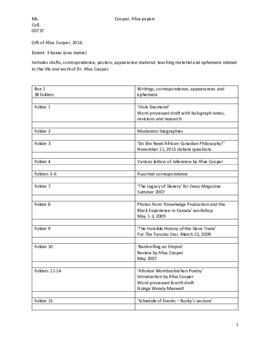 Afua [Ava Pamela] Cooper was born on November 8, 1957, in the Whithorn district of Westmoreland, Jamaica. She moved to Canada in December 1980 as a direct result of the increasing political violence in Jamaica. After the birth of her son Akil in July 1981, Cooper worked as an instructor at Bickford Park High School in Toronto, but she was already beginning to perform her poetry at Toronto's spoken word venues. Her first book of poetry, Breakin Chains, was published in 1983, the same year that she enrolled at the University of Toronto to major in African Studies. In 1988 she took up a residency fellowship at Banff School of Fine Arts and wrote two books of poetry, The Red Caterpillar on College Street (1989), for children, and Memories Have Tongue (1992), which was a finalist in the 1992 Casa de las Americas Award. Dr. Cooper is currently the Ruth Wynn Woodward Professor at Simon Fraser University in Vancouver.

Includes personal and professional correspondence; poem manuscripts; academic papers and lectures for the University of Toronto, York University, Ryerson University and other institutions; academic course materials; personal photographs; appearances; academic positions; cultural and political pursuits; community events; extensive work related to the history of slavery, and the history of African Canadians; the Dub Poets Collective; material related to her books The Hanging of Angélique: the untold story of Canadian slavery and the burning of old Montréal, The Underground railroad: next stop, Toronto!, Henry Bibb, The Young Phillis Wheatley, Memories Have Tongue, Copper Woman, and other material related to her life and work.