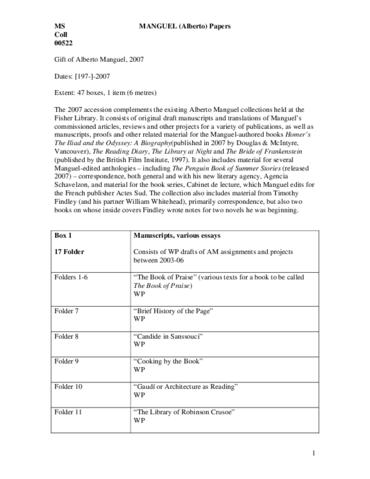 Consists of original draft manuscripts and translations of Manguel's commissioned articles, reviews and other projects for a variety of publications, as well as manuscripts, proofs and other related material for the Manguel-authored books Homer's The Iliad and The Odyssey: A Biography (published in 2007 by Douglas & McIntyre, Vancouver), The Reading Diary, The Library At Night and The Bride of Frankenstein (published by the British Film Institute, 1997). It also includes material for several Manguel-edited anthologies - including The Penguin Book of Summer Stories (released 2007) - correspondence, both general and with his new literary agency, Agencia Schavelzon, and material for the book series, Cabinet de lecture, which Manguel edits for the French publisher Actes Sud. The collection also includes material from Timothy Findley (and his partner William Whitehead), primarily correspondence, but also two books on whose inside covers Findley wrote notes for two novels he was beginning.