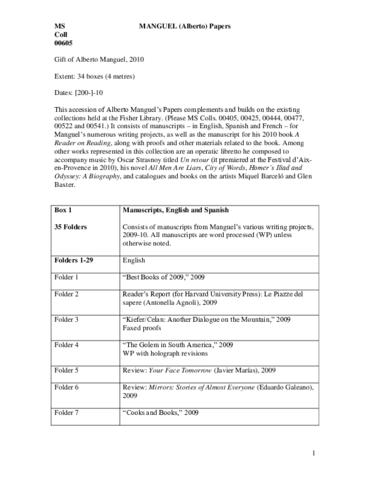 This accession of Alberto Manguel’s Papers complements and builds on the existing collections held at the Fisher Library. (Please MS Colls. 00405, 00425, 00444, 00477, 00522 and 00541.) It consists of manuscripts – in English, Spanish and French – for Manguel’s numerous writing projects, as well as the manuscript for his 2010 book A Reader on Reading, along with proofs and other materials related to the book. Among other works represented in this collection are an operatic libretto he composed to accompany music by Oscar Strasnoy titled Un retour (it premiered at the Festival d’Aix-en-Provence in 2010), his novel All Men Are Liars, City of Words, Homer’s Iliad and Odyssey: A Biography, and catalogues and books on the artists Miquel Barceló and Glen Baxter.