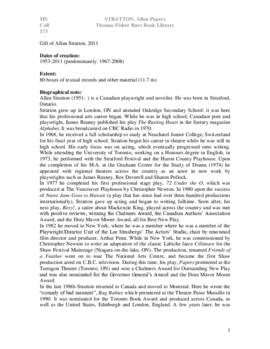 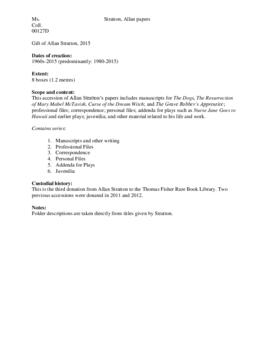 Allan Stratton is a Canadian playwright and novelist. He was born in Stratford, Ontario. Stratton grew up in London, ON and attended Oakridge Secondary School; it was here that his professional arts career began. While he was in high school, Canadian poet and playwright, James Reaney published his play The Rusting Heart in the literary magazine Alphabet. It was broadcasted on CBC Radio in 1970. In 1968, he received a full scholarship to study at Neuchatel Junior College, Switzerland for his final year of high school. Stratton began his career in theatre while he was still in high school. His early focus was on acting, which eventually progressed onto writing. While attending the University of Toronto, working on a Honours degree in English, in 1973, he performed with the Stratford Festival and the Huron County Playhouse. Upon the completion of his M.A. at the Graduate Centre for the Study of Drama (1974) he appeared with regional theatres across the country as an actor in new work by playwrights such as James Reaney, Rex Deverell and Sharon Pollock. In 1977 he completed his first professional stage play, 72 Under the O, which was produced at The Vancouver Playhouse by Christopher Newton. In 1980 upon the success of Nurse Jane Goes to Hawaii (a play that has since had over three hundred productions internationally), Stratton gave up acting and began to writing fulltime. Soon after, his next play, Rexy!, a satire about Mackenzie King, played across the country and was met with positive reviews, winning the Chalmers Award, the Canadian Authors’ Association Award, and the Dora Mavor Moore Award, all for Best New Play. In 1982 he moved to New York, where he was a member where he was a member of the Playwright/Director Unit of the Lee Strasbergs’ The Actors’ Studio, chair by renowned film director and producer, Arthur Penn. While in New York, he was commissioned by Christopher Newton to write an adaptation of the classic Labiche farce Célimare for the Shaw Festival Mainstage (Niagara-on-the-lake, ON). The production, renamed Friends of a Feather went on to tour The National Arts Centre, and became the first Shaw production aired on C.B.C. television. During this time, his play, Papers premiered at the Tarragon Theatre (Toronto, ON) and won a Chalmers Award for Outstanding New Play and was also nominated for the Governor General’s Award and the Dora Mavor Moore Award. In the late 1980s Stratton returned to Canada and moved to Montreal. Here he wrote the “comedy of bad manners”, Bag Babies which premiered at the Theatre Passe Muraille in 1990. It was nominated for the Toronto Book Award and produced across Canada, as well as the United States, Edinburgh and London, England. A few years later, he was commissioned to adapt Dracula for the Skylight Theatre, which was nominated for the Dora Mavor Moore Award for Best New Play, Large Theatre Division, 1995. Stratton’s other plays include: Joggers (1982), The 101 Miracles of Hope Chance (1987), and A Flush of Tories (1991) amongst dozens of others that were written but not published or performed. In the mid-1990s, after moving to Toronto, Stratton began teaching at the Etobicoke School of the Arts. There he was the head of the Drama Department and taught courses such as senior directing, acting and playwriting. His students won many awards, including three consecutive Best New Play Awards at the Sears Drama Festival provincial championships. However, due to classroom and administrative duties limiting his creative writing time, he eventually left his teaching position to pursue writing fulltime, this time in fiction, specializing in books for young adults. His extensive teaching experience lent a hand in his understanding for young people. To date, Stratton has written eight novels: The Phoenix Lottery (2000), Leslie’s Journal (2000), Chanda’s Secrets (2004), Chanda's Wars (2008), Borderline (2010), Grave Robber's Apprentice (2012), The Resurrection of Mary Mabel McTavish (2013) and The Dogs (2015). Stratton’s work reflects his international perspective, his understanding of cultural diversity, and his commitment to social justice. His plays and novels have explored various settings such as Canada in the Great Depression, Italy in the 1940s, the Arctic in the near future, and pre-revolutionary Cuba. Themes found in his writing include poverty and homelessness, abusive relationships, minority rights, media manipulation, and greed. Currently Stratton resides in Toronto with his partner, two cats, and any number of fish.

Manuscript drafts for plays, novels and other writing; correspondence; photographs; juvenilia; and other personal and professional files related to the life and work of Allan Stratton.