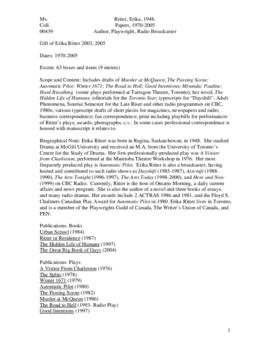 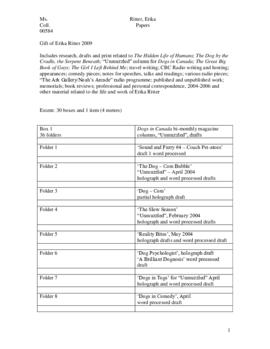 Erika Ritter was born in Regina, Sask., in 1948. She studied Drama at McGill University and received an M.A. from the University of Toronto's Centre for the Study of Drama. Her first professionally produced play was A Visitor from Charleston, performed at the Manitoba Theatre Workshop in 1976. Her most frequently produced play is Automatic Pilot. Ritter is also a broadcaster, having hosted and contributed to such radio shows as Dayshift (1985-1987), Aircraft (1988-1990), The Arts Tonight (1996-1997), The Arts Today (1998-2000), and Here and Now (1999) and Ontario Morning (2000-05) on CBC Radio. Her awards include 2 ACTRAS (1981 and 1986), and the Floyd S. Chalmers Canadian Play Award for Automatic Pilot in 1980. Erika Ritter lives in Toronto, and is a member of the Playwrights Guild of Canada, The Writer's Union of Canada and PEN.