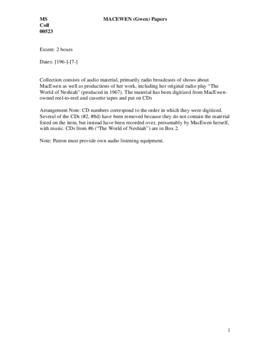 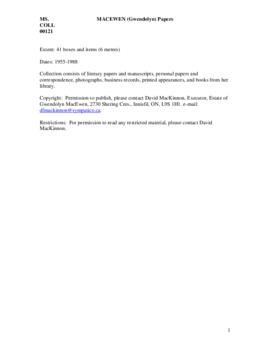 Gwendolyn MacEwen was a prolific poet and writer. She was born 1 September 1941 in Toronto. She published her first poem in The Canadian Forum in 1948 and left high school to write. She self-published her first two collections of poetry: Selah (1961) and The Drunken Clock (1961), which were both limited to 100 copies. In 1963, her first substantial collection of verse, The Rising Fire (1963) was published by The Contact Press and her first novel, Julian the Magician (1963) was published by Macmillan Co. In the 1960s, MacEwen wrote docudramas for the CBC, traveled to the Middle East and taught herself Arabic and Egyptian Hieroglyphics. She also published a Breakfast for Barbarians (1966) and The Shadow-maker (1969), the latter won the Governor General’s Award for poetry. MacEwen’s second novel, King of Egypt, King of Dream (1971), a re-telling of the Egyptian Pharoah, Akhenaton, stemmed from her growing interest in the themes and metaphors of Ancient Egypt. In 1972, she opened the Trojan Horse, a coffee house in Toronto, with her second husband Nikos Tsingos and wrote on Greek topics including Mermaids and Ikons: A Greek Summer (1978) and The Trojan Women: A Play (1979). In 1977, she was awarded the Queen’s Silver Jubilee Award for her contribution to the arts, and served as a writer-in-residence at the University of Western Ontario (1985) and the University of Toronto (1986, 1987). She died in 1987, and was awarded the Governor General’s Award for Poetry posthumously for Afterworlds (1987). After her death, Margaret Atwood and Barrie Callaghan edited two comprehensive volumes of her poetry (1993), which was followed by Rosemary Sulliavan’s biography, Shadow Maker: The Life of Gwendolyn MacEwen (1995).