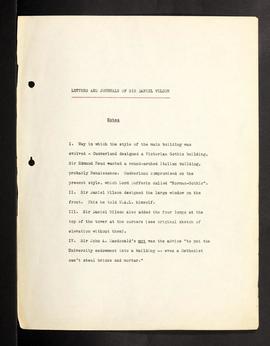 Hugh Hornby Langton, librarian, editor, historian, translator (born at Québec City 29 Aug 1862; died at Toronto 30 Sept 1953), son of John Langton. Educated at the University of Toronto, he was the first full-time registrar of the university 1887-92 and its librarian 1892-1923. He established the library on a firm footing after the fire of 1890, and he developed the collection, staff, services, procedures and traditions from which the present system has grown.

He also brought high standards to his role as the first general editor of the university's scholarly publishing program, 1897-1923, and as joint editor with George M. Wrong of the Chronicles of Canada (32 vols 1914-16) and of the Review of Historical Publications Relating to Canada (1897-1919), which at his initiative became the Canadian Historical Review. After retiring in 1923 he continued to translate for the Champlain Society, to edit and to write biographies. His last publication was an edition of journals and letters of his aunt Anne Langton, "A Gentlewoman in Upper Canada" (1950).