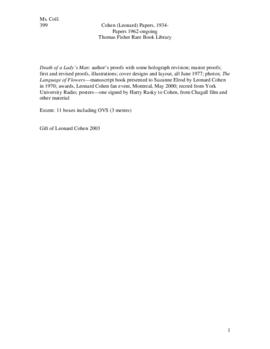 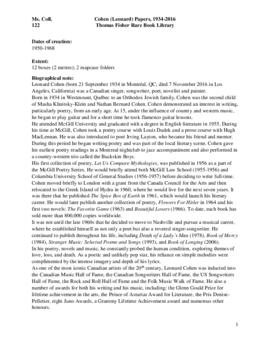 Leonard Cohen (born 21 September 1934 in Montréal, QC; died 7 November 2016 in Los Angeles, California) was a Canadian singer, songwriter, poet, novelist and painter.
Born in 1934 in Westmount, Québec to an Orthodox Jewish family, Cohen was the second child of Masha Klinitsky-Klein and Nathan Bernard Cohen. Cohen demonstrated an interest in writing, particularly poetry, from an early age. At 15, under the influence of country and western music, he began to play guitar and for a short time he took flamenco guitar lessons. He attended McGill University and graduated with a degree in English literature in 1955. During his time at McGill, Cohen took a poetry course with Louis Dudek and a prose course with Hugh MacLennan. He was also introduced to poet Irving Layton, who became his friend and mentor. During this period he began writing poetry and was part of the local literary scene. Cohen gave his earliest poetry readings in a Montreal nightclub to jazz accompaniment and also performed in a country-western trio called the Buckskin Boys.
His first collection of poetry, Let Us Compare Mythologies, was published in 1956 as a part of the McGill Poetry Series. He would briefly attend both McGill Law School (1955-1956) and Columbia University School of General Studies (1956-1957) before deciding to write full-time. Cohen moved briefly to London with a grant from the Canada Council for the Arts and then relocated to the Greek Island of Hydra in 1960, where he would live for the next seven years. It was there that he published The Spice Box of Earth in 1961, which would launch his literary career. He would later publish another collection of poetry, Flowers For Hitler in 1964 and his first two novels: The Favorite Game (1963) and Beautiful Losers (1966). To date, each book has sold more than 800,000 copies worldwide. It was not until the late 1960s that he decided to move to Nashville and pursue a musical career, where he established himself as not only a poet but also a revered singer-songwriter. He continued to publish throughout his life, including Death of a Lady’s Man (1978), Book of Mercy
(1984), Stranger Music: Selected Poems and Songs (1993), and Book of Longing (2006). In his poetry, novels and music, he constantly probed the human condition, exploring themes of love, loss, and death. As a poetic and unlikely pop star, his reliance on simple melodies were complimented by the intense imagery and depth of his lyrics. As one of the most iconic Canadian artists of the 20th century, Leonard Cohen was inducted into the Canadian Music Hall of Fame, the Canadian Songwriters Hall of Fame, the US Songwriters Hall of Fame, the Rock and Roll Hall of Fame and the Folk Music Walk of Fame. He also a number of awards for both his writing and his music, including: the Glenn Gould Prize for
lifetime achievement in the arts, the Prince of Asturias Award for Literature, the Prix DenisePelletier, eight Juno Awards, a Grammy Lifetime Achievement award and numerous other
honours.