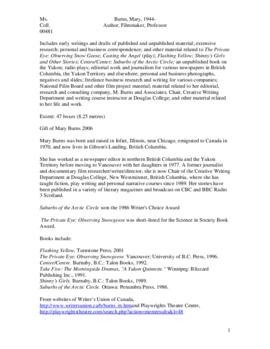 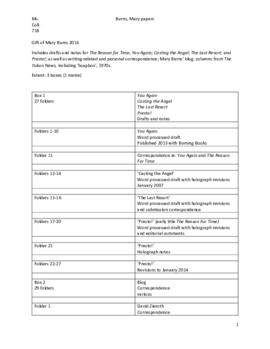 Mary Burns was born and raised in Joliet, Illinois, near Chicago, emigrated to Canada in 1970, and now lives in Gibson's Landing, British Columbia. She has worked as a newspaper editor in northern British Columbia and the Yukon Territory before moving to Vancouver with her daughters in 1977. A former journalist and documentary film researcher/writer/director, she is now Chair of the Creative Writing Department at Douglas College, New Westminster, British Columbia, where she has taught fiction, play writing and personal narrative courses since 1989. Her stories have been published in a variety of literary magazines and broadcast on CBC and BBC Radio 3 Scotland.

Includes early writings and drafts of published and unpublished material, extensive research, personal and business correspondence, and other material related to her books and publications.