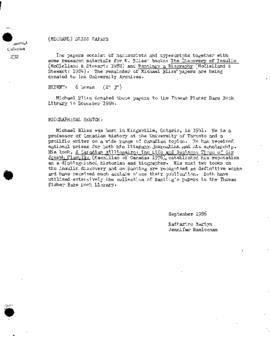 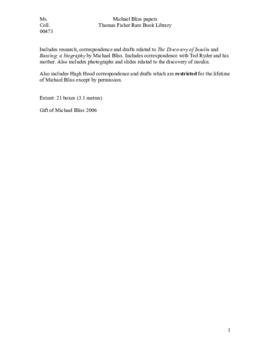 Michael Bliss was born in Kingsville, Ontario, in 1941. He is a professor of Canadian history at the University of Toronto and a prolific writer on a wide range of Canadian topics. He has received national prizes for both his literary journalism and his scholarship. His book, 'A Canadian Millionaire: The Life and Business Times of Sir Joseph Flavelle' (Macmillan of Canada: 1978), established his reputation as a distinguished historian and biographer. His next two books on the insulin discovery and on Banting are recognized as definitive works and have received much acclaim since their publication. Both have utilized extensively the collection of Banting's papers in the Thomas Fisher Rare Book Library.