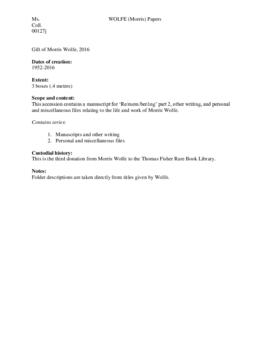 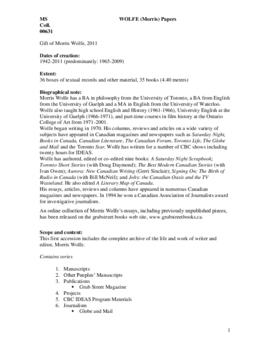 Morris Wolfe has a BA in philosophy from the University of Toronto, a BA from English from the University of Guelph and a MA in English from the University of Waterloo. Wolfe also taught high school English and History (1961-1966), University English at the
University of Guelph (1966-1971), and part-time courses in film history at the Ontario College of Art from 1971-2001.
Wolfe began writing in 1970. His columns, reviews and articles on a wide variety of subjects have appeared in Canadian magazines and newspapers such as Saturday Night, Books in Canada, Canadian Literature, The Canadian Forum, Toronto Life, The Globe and Mail and the Toronto Star. Wolfe has written for a number of CBC shows including twenty hours for IDEAS. Wolfe has authored, edited or co-edited nine books: A Saturday Night Scrapbook; Toronto Short Stories (with Doug Daymond); The Best Modern Canadian Stories (with Ivan Owen); Aurora: New Canadian Writing (Gerri Sinclair); Signing On: The Birth of Radio in Canada (with Bill McNeil); and Jolts: the Canadian Oasis and the TV
Wasteland. He also edited A Literary Map of Canada. His essays, articles, reviews and columns have appeared in numerous Canadian
magazines and newspapers. In 1994 he won a Canadian Association of Journalists award for investigative journalism.

Contains files relating to the life and work of writer and editor, Morris Wolfe.