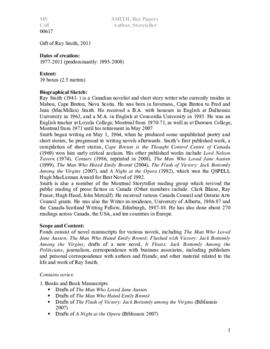 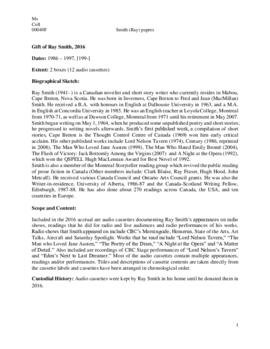 Ray Smith is a Canadian novelist and short story writer who currently resides in Mabou, Cape Breton, Nova Scotia. He was an English teacher at Loyola College, Montreal, from 1970-71, as well as at Dawson College, Montreal from 1971 until his retirement in May 2007. Smith began writing on 1964 when he produced some unpublished poetry and short stories. He progressed to writing novels afterwards. Smith’s first published work, a compilation of short stories, Cape Breton is the Thought Control Centre of Canada (1969) won him early critical acclaim. His other published works include Lord Nelson Tavern (1974), Century (1986, reprinted in 2008), The Man Who Loved Jane Austen (1999), The Man Who Hated Emily Brontë (2004), The Flush of Victory: Jack Bottomly Among the Virgins (2007), and A Night at the Opera (1992), which won the QSPELL Hugh MacLennan Award for Best Novel of 1992.