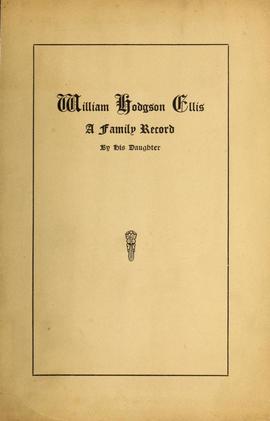 William Hodgon Ellis was Dean of the Faculty of Applied Science and Engineering from 1914-1919.

He was born in Bakewell, Derbyshire, England on November 23, 1845, the eldest son of John Eimeo Ellis and Eliza Hodgson’s three children. In 1854, his parent decided to emigrate to the United Stations, sailing from Liverpool to Boston they would buy a farm near Bloomington, Illinois before settling on another farm near Geulph, Ontario. In 1863, the family moved into a house on Brock Street in Toronto. In the fall, Ellis entered the University of Toronto as a student and would begin a relationship with the university that would span over five decades. In 1867, he graduated in Arts with the Gold Medal in Natural Sciences. After completing his Bachelors of Medicine in 1870, he left for a year in England and gained a L.R.C.P. license to practice medicine.

He returned to Toronto in 1871, following a year abroad in England, to become a Professor of Chemistry at the Medical Faculty of Trinity College. In 1878, with the opening of the School of Practical Science, Ellis became an assistant Professor of Chemistry, giving up his lectureships in Trinity College, and was promoted to Professor of Applied Chemistry in1887. He was lecturer in Toxicology from 1892 and Professor from 1897 to 1913. In 1907, when the School of Practical Science officially became the Faculty of Applied Science and Engineering, Ellis was named Head of the Chemistry department. In 1914, Ellis was promoted to Dean of the Faculty. When he resigned in 1919, he was made LLD of both McGill and the University of Toronto, and Honorary Member of the Engineering Institute of Canada.

Outside of academia, Ellis was a Public Analyst for Inland Revenue Department for over 30 years between 1876-1907. During the same period, he also helped the department of the Attorney General by analysing many criminal cases with forensic science. Ellis participated in many societies including being a Fellow at the Institute of Chemistry and of the Royal Society of Canada, President of the Canadian Institute, and President of the Canadian Section of the Society of Chemical Industry.

The fonds consists of three notebooks with handwritten notes from Ellis, a 1921 publication by his daughter titled “A Family Record”, and a book, titled “The Elements of Materia Medica & Therapeutics” by Johathan Pereira, marked with inscriptions. One notebook records his career in forensic science with his handwritten notes from criminal cases and correspondence with individuals such as the attorney general and coroner’s offices.