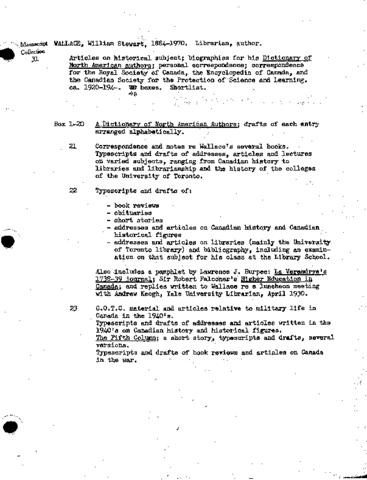 William Stewart Wallace was born at Georgetown, Ont., in 1884. He was Chief Librarian of the University of Toronto between 1922-54. He was president of the Ontario Library Association in 1942/43 and of the Canadian Library Association in 1950/51. He made many contributions to Canadian literature, and in 1957 authored the Report on provincial library service in Ontario, which was a catalyst for creation of the Provincial Library Service in 1959. He died in 1970.

Contains articles on historical subjects; biographies for his Dictionary of North American authors; personal correspondence; correspondence for the Royal Society of Canada, the Encyclopedia of Canada, and the Canadian Society for the Protection of Science and Learning, ca. 1920-1940-.

Material may be requested in person at the Fisher Library Reference Desk, or in advance using our online stack retrieval request form: https://fisher.library.utoronto.ca/stack-retrieval-form. Please note that this material requires 2 business days to retrieve.