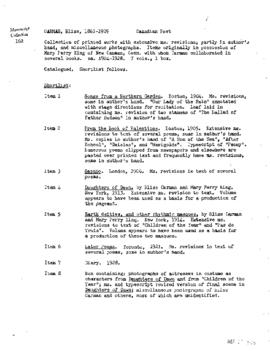 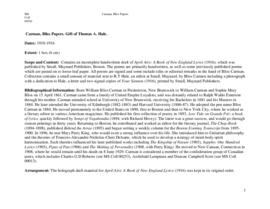 William Bliss Carman (1861–1929) was an editor, essayist and poet. He was born in Fredericton, New Brunswick, the son of William Carman and Sophia Mary Bliss. He died in New Canaan, Connecticut.

He went to Collegiate Grammar School in Fredericton with his cousin Charles G.D. Roberts. He graduated from the University of New Brunswick in 1881 after which he attended Edinburgh University in Scotland for two years. In 1883, he returned to Fredericton where he taught at Collegiate Grammar School and read law, receiving an M.A. in 1884. From 1886 to 1888, he did post graduate work in history and philosophy at Harvard. Subsequently, he was employed on the editorial staffs of various literary publications in New York, Chicago and Boston, including The Atlantic, Cosmopolitan, Current Literature, The Chapbook, The Independent, Literary World, and The Outlook.

In 1896, Carman met Dr. Morris Lee King and his wife, Mary Perry King. He collaborated with Mrs. King on The Making of Personality (1908) and on several other books, brochures, masques and interpretive dances. In 1908, he met Madeleine Galbraith at a reception following her appearance in a play at Hart House, University of Toronto. The same year, Carman moved to New Canaan, Connecticut, near the King’s estate, where he devoted the later years of his life solely to writing poetry.