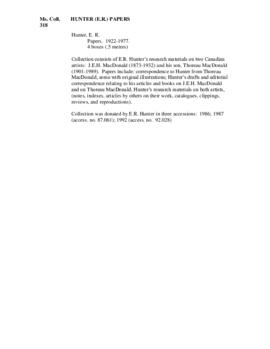 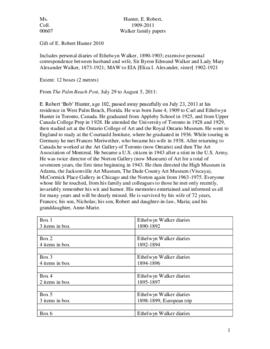 Sir Edmund Walker was a Canadian banker, art collector and philanthropist, president of the Canadian Bank of Commerce, co-founder of National Art Gallery of Canada, Art Museum of Toronto, Royal Ontario Museum, Champlain Society, and Chancellor of the University of Toronto.

E. Robert Hunter was born June 4, 1909 to Carl and Ethelwyn Hunter in Toronto, Canada. He graduated from Appleby School in 1925, and from Upper Canada College Prep in 1928. He attended the University of Toronto in 1928 and 1929, then studied art at the Ontario College of Art and the Royal Ontario Museum. He went to England to study at the Courtauld Institute, where he graduated in 1936. While touring in Germany he met Frances Meriwether, who became his wife in 1938. After returning to Canada he worked at the Art Gallery of Toronto (now Ontario) and then The Art Association of Montreal. He became a U.S. citizen in 1943 after a stint in the U.S. Army. He was twice director of the Norton Gallery (now Museum) of Art for a total of seventeen years, the first time beginning in 1943. He then directed the High Museum in Atlanta, the Jacksonville Art Museum, The Dade County Art Museum (Viscaya), McCormick Place Gallery in Chicago and the Norton again from 1963-1975. He is the author of the biographies J.E.H. MacDonald (Ryerson Press, 1940) and Thoreau MacDonald (Ryerson Press, 1942). Hunter passed away on July 23, 2011.