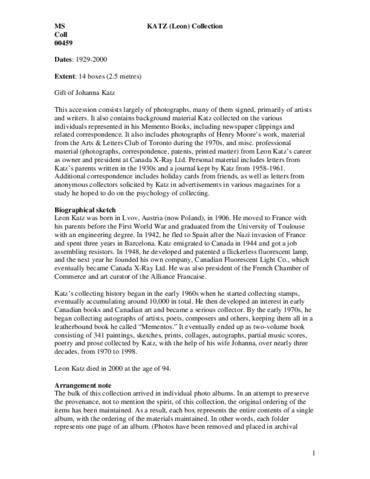 Leon Katz was born in Lvov, Austria (now Poland), in 1906. He moved to France with his parents before the First World War and graduated from the university of Toulouse with an engineering degree. In 1941, he fled to Spain after the Nazi invasion of France and spent three years in Barcelona. Katz emigrated to Canada in 1944 and got a job assembling resistors. In 1948, he developed and patented a flickerless fluorescent lamp, and the next year he founded his own company, Canadian Fluorescent Light Co., which eventually became Canada X-Ray Ltd. He was also president of the French Chamber of Commerce and art curator of the Alliance Francaise.

Consists largely of photographs, many of them signed, primarily of artists and writers. Also contains background material Katz collected on the various individuals represented in his Momento Books, including newspaper clippings and related correspondence. It also includes photographs of Henry Moore's work, material from the Arts & Letters Club of Toronto during the 1970s, and misc. professional material (photographs, correspondence, patents, printed matter) from Leon Katz's career as owner and president at Canada X-Ray Ltd. Personal material includes letters from Katz's parents written in the 1930s and a journal kept by Katz from 1958-1961. Additional correspondence includes holiday cards from friends, as well as letters from anonymous collectors solicited by Katz in advertisements in various magazines for a study he hoped to do on the psychology of collecting.