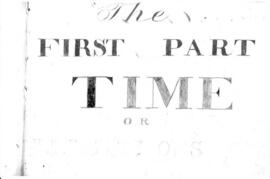 Henry Frost was active in the musical community of York County, Upper Canada, between the years of 1835 and 1850. Henry Frost taught at a common school where he included music in the curriculum. It is believed that he was also responsible for musical activities in the local Anglican Church, (though the documentary history of the church was lost in a fire). Furthermore, according to established education patterns in upper Canada, he probably also served as a teacher in a singing school for adults.

Henry Frost left his collection to his replacement teacher Thomas Scott. Scott's descendants passed the documents to principal James T. Jenkins of Jarvis Institute (Toronto). The manual then became part of a textbook collection held by the Ontario College of Education, (established 1921 by the University of Toronto), which in 1972 became the Faculty of Education in the University of Toronto, which in turn, merged with the Ontario Institute for Studies in Education, (OISE). The manual then was micro filmed, and its current location is unknown. The filmed version was digitized, and the digitized images were donated to The Faculty of Music Library's Archives in 2011 by Cam Trowsdale.