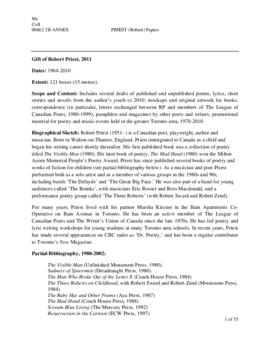 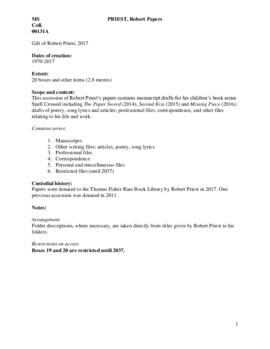 Robert Priest is a Canadian poet, playwright, author and musician. Born in Walton-on-Thames, England, Priest immigrated to Canada as a child and began his writing career shortly thereafter. His first published book was a collection of poetry titled The Visible Man (1980). His later book of poetry, The Mad Hand (1980) won the Milton Acorn Memorial ’s Poetry Award. Priest has since published several books of poetry and works of fiction for children (see partial bibliography below). As a musician and poet Priest performed both as a solo artist and as a member of various groups in the 1980s and 90s, including bands ‘The Defayds’ and ‘The Great Big Face.’ He was also part of a band for young audiences called‘The Boinks’, with musicians Eric Rosser and Ross Macdonald, and a performance poetry group called ‘The Three Roberts’ (with Robert Sward and Robert Zend). For many years, Priest lived with his partner Marsha Kirzner in the Bain Apartments Co-Operative on Bain Avenue in Toronto. He has been an active member of The League of Canadian Poets and The Writer’s Union of Canada since the late 1970s. He has led poetry and lyric writing workshops for young students at many Toronto area schools. In recent years, Priest has made several appearances on CBC radio as ‘Dr. Poetry,’ and has been a regular contributor to Toronto’s Now Magazine.

Includes several drafts of published and unpublished poems, lyrics, short stories and novels from the author’s youth to 2010; mockups and original artwork for books; correspondence (in particular, letters exchanged between RP and members of The League of Canadian Poets, 1980-1999); pamphlets and magazines by other poets and writers; promotional material for poetry and music events held in the greater Toronto area. Also contains manuscript drafts for his children’s book series Spell Crossed including The Paper Sword (2014), Second Kiss (2015) and Missing Piece (2016); drafts of poetry, song lyrics and articles; professional files; correspondence, and other files relating to his life and work.

Some restrictions on access. Consult finding aids for further details.