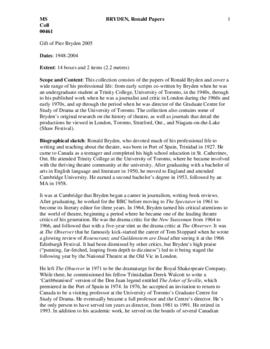 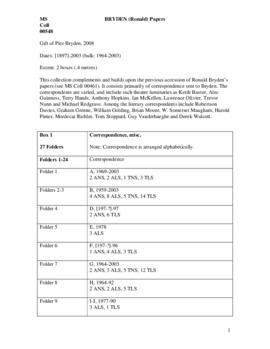 Ronald Bryden, who devoted much of his professional life to writing and teaching about the theatre, was born in Port of Spain, Trinidad in 1927. He came to Canada as a teenager and completed his high school education in St. Catherines, Ont. He attended Trinity College at the Univ ersity of Toronto, where he became involved with the thriving theatre community at the university. After graduating with a bachelor of arts in English language and literature in 1950, he moved to England and attended Cambridge University. He earned a second bachelor’s degree in 1953, followed by an MA in 1958.

It was at Cambridge that Bryden began a career in journalism, writing book reviews. After graduating, he worked for the BBC before moving to The Spectator in 1961 to become its literary editor for three years. In 1964, Bryden turned his critical attentions to the world of theatre, beginning a period where he became one of the leading theatre critics of his generation. He was the drama critic for the New Statesman from 1964 to 1966, and followed that with a five-year stint as the drama critic at The Observer. It was at The Observer that he famously kick-started the career of Tom Stoppard when he wrote a glowing review of Rosencrantz and Guildenstern are Dead after seeing it at the 1966 Edinburgh Festival. It had been dismissed by other critics, but Bryden’s high praise (“punning, far-fetched, leaping from depth to dizziness”) led to it being staged the following year by the National Theatre at the Old Vic in London.

He left The Observer in 1971 to be the dramaturge for the Royal Shakespeare Company. While there, he commissioned his fellow Trinidadian Derek Walcott to write a ‘Caribbeanised’ version of the Don Juan legend entitled The Joker of Seville, which premiered in the Port of Spain in 1974. In 1976, he accepted an invitation to return to Canada to be a visiting professor at the University of Toronto’s Graduate Centre for Study of Drama. He eventually became a full professor and the Centre’s director. He’s the only person to have served ten years as director, from 1981 to 1991. He retired in1993. In addition to his academic work, he served on the boards of several Canadian theatre organizations, including the Stratford and Shaw Festivals (he was also a literary adviser for the Shaw in 1990s), and the Canadian Stage Company. He also continued to be a prolific writer, contributing articles and reviews to numerous publications (including Maclean’s magazine and the Globe and Mail), as well as authoring two collections of essays, The Unfinished Hero and Other Essays (1969) and Shaw and His Contemporaries (2002). Bryden died of complications following heart surgery in 2004 at the age of 72.

The collection consists of the papers of Ronald Bryden and cover a wide range of his professional life, including scripts co-written by Bryden when he was an undergraduate at Trinity College, University of Toronto, through to his published work as a journalist and up through the period when he was director of the Graduate Centre for Study of Drama at the University of Toronto.