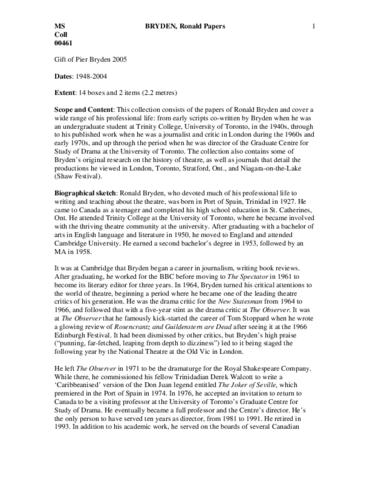 This collection consists of the papers of Ronald Bryden and cover a wide range of his professional life: from early scripts co-written by Bryden when he was an undergraduate student at Trinity College, University of Toronto, in the 1940s, through to his published work when he was a journalist and critic in London during the 1960s and early 1970s, and up through the period when he was director of the Graduate Centre for Study of Drama at the University of Toronto. The collection also contains some of Bryden’s original research on the history of theatre, as well as journals that detail the productions he viewed in London, Toronto, Stratford, Ont., and Niagara-on-the-Lake (Shaw Festival).