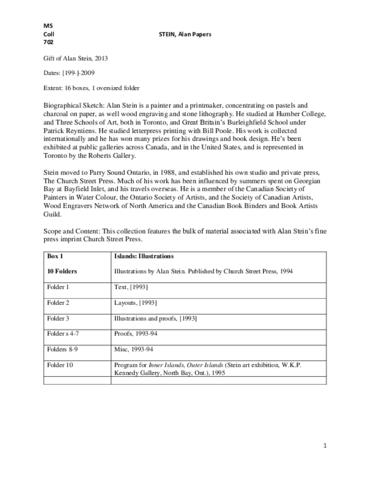 Alan Stein is a painter and a printmaker, concentrating on pastels and charcoal on paper, as well wood engraving and stone lithography. He studied at Humber College, and Three Schools of Art, both in Toronto, and Great Britain’s Burleighfield School under Patrick Reyntiens. He studied letterpress printing with Bill Poole. His work is collected internationally and he has won many prizes for his drawings and book design. He’s been exhibited at public galleries across Canada, and in the United States, and is represented in Toronto by the Roberts Gallery.
Stein moved to Parry Sound Ontario, in 1988, and established his own studio and private press, The Church Street Press. Much of his work has been influenced by summers spent on Georgian Bay at Bayfield Inlet, and his travels overseas. He is a member of the Canadian Society of Painters in Water Colour, the Ontario Society of Artists, and the Society of Canadian Artists, Wood Engravers Network of North America and the Canadian Book Binders and Book Artists Guild.