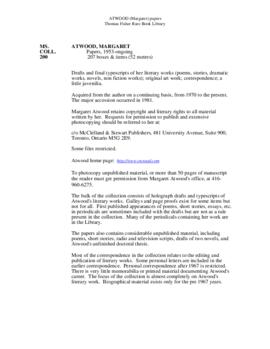 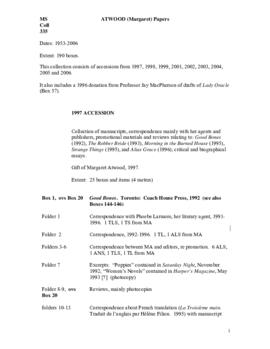 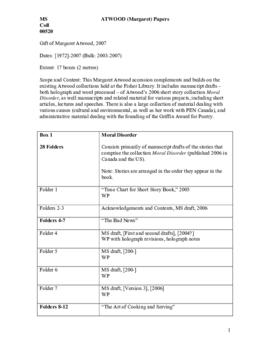 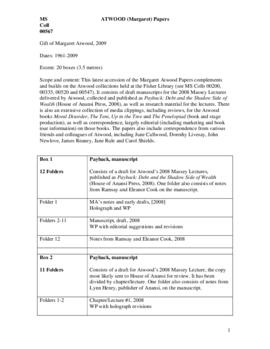 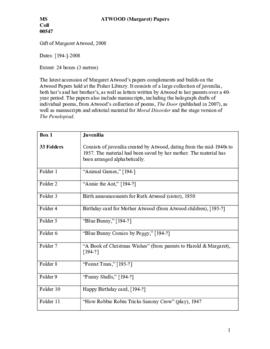 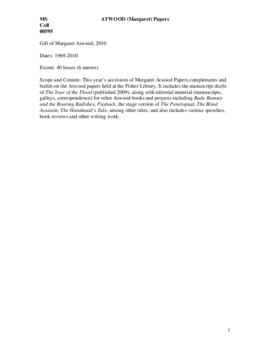 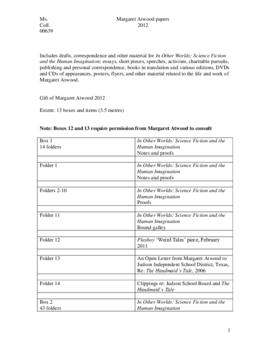 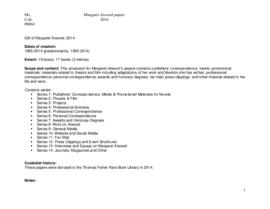 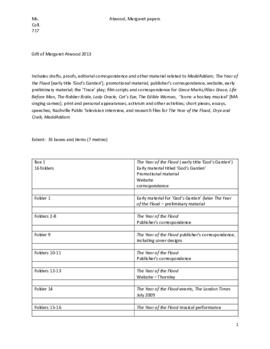 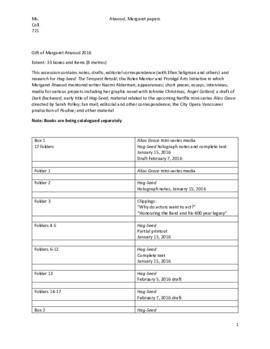 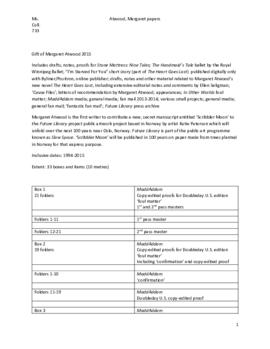 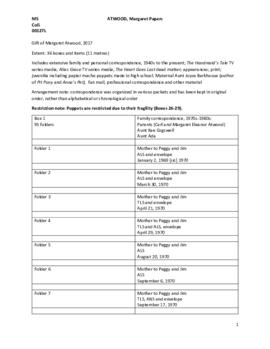 Margaret Eleanor "Peggy" Atwood is a novelist, poet, literary critic, essayist, teacher, environmental activist, and a pioneer of Canadian women's writing. She was born November 18, 1939 in Ottawa and grew up in northern Ontario, Quebec, and Toronto.

She earned a B.A. in English from Victoria College, University of Toronto, and an M.A. from Harvard. Atwood has had a distinguished career in teaching including positions at the University of British Columbia (1964-1965), Sir George Williams University (Concordia University) (1967-1968), York University (1971-1972) and New York University (1986). Her first book of poetry, Double Persephone, was published in 1961, followed by The Circle Games (1966), which won the Governor General’s Award in Poetry. She published her first novel, The Edible Woman in 1969, and subsequently wrote Procedures for Underground (1970) and The Journals of Susanna Moodie (1970). Her most well-known novels include: The Handmaid’s Tale (1985), The Robber Bride (1994), Alias Grace (1996), the Blind Assassin (2000), which was the Booker Prize, and Orynx and Crake (2003). Her complete and up-to date bibliography can be accessed here: http://margaretatwood.ca/full-bibliography-2/. Her work has been translated into many languages and published in more than twenty-five countries.

Among her numerous honors and awards are the Governor General’s Award, the Booker Prize, the Arthur C. Clarke Award, a Guggenheim Fellowship, a Molson Award, the Ida Nudel Humanitarian Award, and a Canada Short Fiction Award. She was named a Companion of the Order of Canada in 1981 and inducted into Canada’s Walk of Fame in 2001. She has served as a Writer-In-Residence at the University of Toronto (1972-1973), Mcquarrie University (1987) and Trinity University (1989). She has previously worked as an editor at Anansi Press (1971-1973), is a founder of the Writers’ Trust of Canada and was President of PEN Canada (1984-1986). She lives in Toronto.