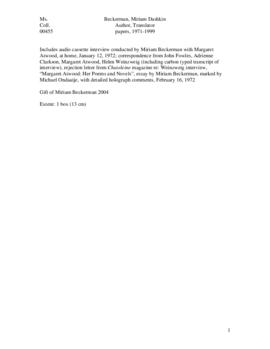 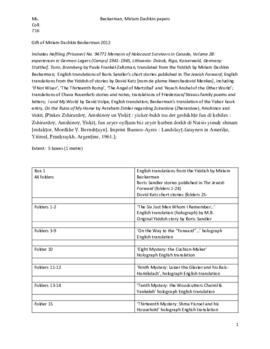 Miriam Beckerman is an award-winning Yiddish translator who was born in Toronto where she has lived all her life except for five years in Israel (1947-1952). She has had five books published: (1) Wartime Experiences in Lithuania by Rivka Lozansky Bogomolnaya, Vallentine Mitchell, 2000; (2) Nightmares - Memoirs of the Years of Horrors Under Nazi Rule in Europe, 1939-1945, by Konrad Charmatz, Syracuse University Press, 2003; (3) Haftling (Prisoner) No. 94771, Experiences in German Lagers (camps), 1941-1945, Concordia University, http://www.migs.concordia.ca/survivor.html 2003; (4) The Book of Borszcow, a yizkor book, http://www.jewishgen.org 2005; and (5) A Thousand Threads - a story told through Yiddish Letters, Remembrance Books, Washington, DC, 2005. Miriam's translations have also appeared in the Canadian Jewish News, Pakn Treger, Parchment, Lifestyles International, as well as translations into Yiddish in the Yiddish Forward. Miriam Beckerman is a graduate of York University, Toronto, earning a Bachelor of Arts in 1973 and a Bachelor of Arts with Honours in 1995.