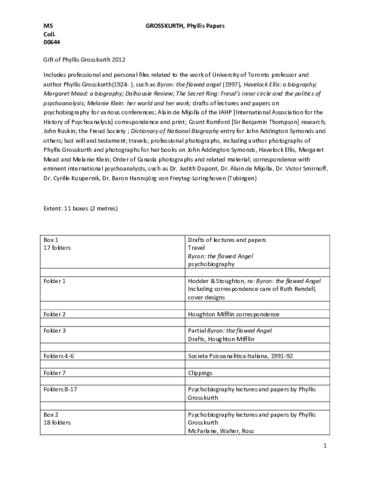 biographical note
Canadian scholar and writer, Phyllis Grosskurth was born in Toronto. She began teaching English at the University of Toronto in 1965 and retired in 1989. Her teaching and research has focused on biography and the history of psychoanalysis. She has published several biographies, notably John Addington Symonds: A Biography (1964), which won the Governor-General's Award for nonfiction and the University of British Columbia Award for Biography in 1965. Her other books include Leslie Stephen (1968), Gabrielle Roy (1969), Havelock Ellis: A Biography (1980), Melanie Klein: Her World and Her Work (1986), Margaret Mead (1988), The Secret Ring: Freud's Inner Circle and the Politics of Psychoanalysis (1991), Byron: The Flawed Angel (1997), and Elusive Subject: A Biographer's Life (1999).

Material may be requested in person at the Fisher Library Reference Desk, or in advance using our online stack retrieval request form: https://fisher.library.utoronto.ca/stack-retrieval-request.