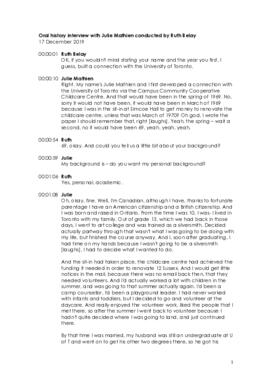 Julie Mathien, a long-time childcare reform advocate and former public servant, was an early member of the Campus Community Cooperative Daycare. Established in 1969, the collective developed the childcare centre at 12 Sussex Ave. at the St. George Campus of the University of Toronto. Mathien recounts her experiences as both a volunteer and staff member providing insight into the underlying philosophy, membership, and organization of the collective. She describes the history of negotiations and tensions with UofT’s administration, including what led to the 1969 occupation of Simcoe Hall, as well as the shifting media coverage on the centre. Mathien explains the evolving discourse on approaches to childcare that have been part of her research and later work with the municipal and provincial governments. The interview also covers Mathien’s work with the Huron-Sussex Residents Organization, where she describes past confrontations with the University and their jointly developed plans for the future of the neighborhood.