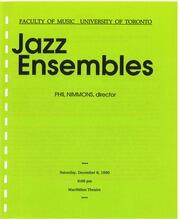 University of Toronto. Faculty of Music

File consists of a program and recording from a concert by the Jazz Ensembles, directed by Phil Nimmons, in MacMillan Theatre. Selections were announced from the stage and chosen from arrangements and compositions by Matt Harris, Bob Brookmeyer, Sammy Nestico, Thad Jones, Bill Holman, Ian McDougal, Rob McConnell, and Phil Nimmons. Selections were announced from the stage.

For a digital streaming copy of this concert, please contact the Music Library.