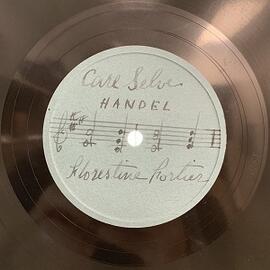 Title and statement of responsibility area

33 m of audio recordings and other materials

Other title information of publisher's series

John (Reginald) Stratton was born on August 1, 1931 in Toronto, Ontario, Canada and died January 2, 2001 in Toronto. He was a baritone singer, record historian and producer, and philosophy professor at the Ryerson Polytechnical Institute in Toronto (1971-1991).

Stratton attended Upper Canada College, a private boys' school in Toronto, before attending Trinity College, where he obtained his Bachelor of Arts (BA) in 1954, followed by his Master of Arts (MA) in 1958, and PhD in Philosophy in 1969. He studied voice with Gina Cigna and Aksel Schiøtz at the Royal Conservatory of Music in Toronto, and Florence Easton and Herbert Janssen in New York.

He wrote articles for the Record Collector, the Journal of the British Institute of Recorded Sound, Opera Quarterly, the Association of Recorded Sound Collections (ARSC) journal, and gave several lectures on early recording practices and vocal styles. In 1986, he received a Grammy nomination for his work on the liner notes that accompanied the Mapleson Cylinder Project collection, published by the Rodgers and Hammerstein Archives, Lincoln Centre.

Stratton collected records from the 1940s until his death, with a focus on solo vocal and opera recordings. In 1966, he founded his own record label Cantilena, distributed by Rococo Records.

Stephen Clarke was born in 1946 in Toronto, Ontario, Canada. He attended Trinity College, where he met and became friends with John Stratton (1931-2000). Clarke studied law, in addition to taking voice lessons with Howell Glynn at the Royal Conservatory of Music; Elizabeth Benson Guy and her mother-in-law Greta Kraus at the University of Toronto Faculty of Music; and Gladys Whitehead at the Hamilton Conservatory. In 1978, he stopped appearing in professional music performances to focus on his career as a lawyer. However, music continued to be an important part of his life. Clarke and Stratton remained friends throughout their lives, and Stratton made Clarke his estate trustee.

After Stratton's death in 2000, Clarke continued to contribute to Stratton's record collection, and obtained thousands of digital audio files from Ward Marston and from the Sir Paul Getty collection.

Clarke is currently the chair-person for Historic Masters Ltd. He regularly lectures on the Stratton-Clarke collection and historic vocal recordings for artists of the Canadian Opera Company Ensemble Studio and students at the University of Toronto Faculty of Music.

The Stratton-Clarke Collection was transferred by Stephen Clarke and the Estate of John Stratton to the University of Toronto Music Library in 2020. It includes historical vocal music recordings (78 rpms and LPs), equipment (including a Victor VI), and the personal papers of John Stratton. The LPs were added to the library's circulating collection and can be identified by the call number prefix "SC" in our library catalogue.

Stratton began collecting records in the 1940s in Toronto, and continued to add to his collection throughout his lifetime. Clarke and Stratton met in 1967 while they were studying at Trinity College and Clarke later became his estate trustee. Clarke continued to build the collection after Stratton's death in 2001. In addition to buying physical records to fill gaps in the collection, Clarke also obtained thousands of digital audio files from the collection of John Paul Getty, Jr.

Collection consists of approximately 6,500 78 rpm records, and the personal papers of one of its collectors, John Stratton. Stratton's personal papers provide contextual information about one of the collectors of the "Stratton-Clarke Collection," and primary source material relating to his research of historical vocal recordings and recording practices.

The 78 rpm record collection spans nearly the entire history of 78 rpm record production, from acoustic recordings to early electronic recordings and beyond, covering the first half of the twentieth century. The recordings are primarily pressed on shellac discs, ranging from 7 to 14 inches on diameter, and capture performances of approximately 1,000 vocalists, performing the works of more than 900 different composers on at least 100 different labels. The collection was loosely built on four of Stratton's main interests regarding historical vocal recordings: the "Golden age of singing" (pre World War One); the Mapleson recordings (live Metropolitan Opera performances captured on wax cylinders by Lionel Mapleson between 1900 and 1904); Canadian performers; and pre-revolutionary Russian recordings (pre-1917). The collection includes unpublished and test pressings, as well as published materials.

Availability of other formats